Join the weekly challenge to count down to Earth Day! 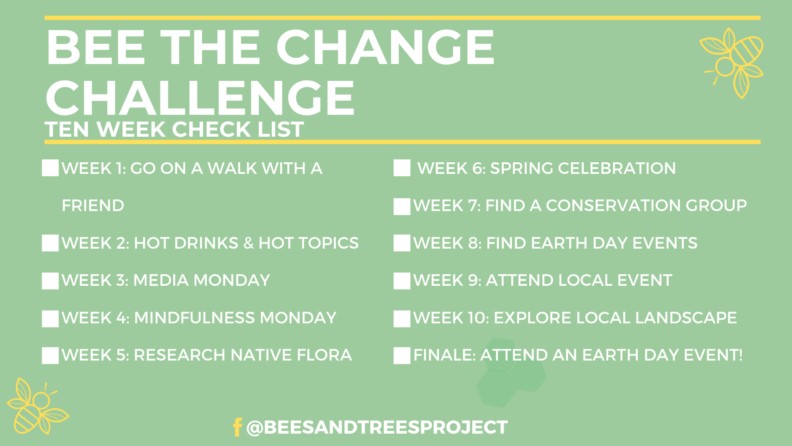 Proposals are sought on the topic of improving and enhancing the nation’s water supply, including evaluation of innovative approaches to water treatment, infrastructure design, retrofitting, maintenance, management, and replacement; exploration and advancement of our understanding of changes in the quantity and quality of water resources in response to a changing climate, population shifts, and land use changes; development of methods for better estimation of water supply, both surface and groundwater, including estimation of the physical supply and of the economic supply of water; development and evaluation of processes and governance mechanisms for integrated surface/ground water management; and the evaluation and assessment of conservation practices.

Any investigator at an accredited institution of higher learning in the United States is eligible to apply. Funds have not been yet approved for this program for 2019, contingent upon the availability of funds.

For more information and to apply.

Oct 25-27th, location to be announced

Space — the Final Frontier! Join alumni and other company representatives from BLUE ORIGIN and SPACEX to learn what it’s like to work in the space industry.
About the companies:
SpaceX designs, manufactures and launches advanced rockets and spacecraft. The company was founded in 2002 to revolutionize space technology, with the ultimate goal of enabling people to live on other planets.

Blue Origin is an American privately funded aerospace manufacturer and spaceflight services company set up by Amazon.com founder Jeff Bezos with its headquarters in Kent, Washington.

For more information and updates

are invited to attend an information session on Undergraduate Research. The information presented will give students tools to get started and locate a faculty mentor. There will be two free sessions in room 114 of the Smith Center for Undergraduate Education.

The NW Climate Science Center invites proposals from faculty at UW, BSU, UM, WSU and WWU for funding to support research by graduate students and post-docs in fields relating to understanding and addressing climate impacts on NW natural and cultural resources, and training of these NW CSC Fellows in the principles and practices of co-producing decision-relevant (“actionable”) science. Funding will be available as early as Fall 2017, to support research performed during the 17-18 academic year (at least through December 2017).

For details about the fellowship and how to apply, please click here.   Applications should be emailed to jacquem@wsu.edu- those received before 11 September 2017 will be given preference.

Software Carpentry is a hands-on workshop being hosted by the Center for Environmental Research, Education and Outreach (CEREO), Center for Institutional Research Computing (CIRC), and Laboratory for Atmospheric Research (LAR). The two-day workshop will be held from August 16-17 and focuses on skills for computationally-intensive research.  Live exercises and tutorials will introduce a variety of topics including programming in Python, version control with Git, and task automation with the unix shell. No prior programming experience is needed! This workshop is ideal for incoming graduate students, or any researcher looking for more experience with Python.

To what extent is sinful behavior innate versus influenced by your surroundings?

My research has shown that environmental impact (e.g., carbon footprint, engagement in household “green” practices like recycling and buying organic products) is shaped more by context than it is by anything innate. For example, a study I conducted compared “green behaviors” of suburban residents to urban residents. Suburban residents scored lower, even though their levels of concern for the environment were the same. But living in a suburb makes it harder to buy green products if they aren’t available in the local store, commute by bike or transit, and live with fewer than two vehicles. That’s why it’s so important that cities take on initiatives to make sustainable living the “default option” if we really want to get serious about using fewer resources (e.g., water, energy).

What makes some cities more sinful than others? Laws? Culture?

Both, likely. Policies to discourage the construction of extremely large homes (“McMansion ordinances”) and encourage, or incentivize, energy efficiency upgrades likely reduce the energy footprint of the residential sector. Likewise, a culture that encourages cycling and walking will make it feel more normal for people to leave their car at home to get to work.

Should government play a role in trying to reduce greed and consumerism?

Yes, my research suggests so. Data on household environmental impact show that people impact the environment much more by going about their daily lives (working, taking kids to school, taking a vacation to relax, or traveling for work) than they do through senseless consumerism. So if local and state governments can ease the financial burden of making the “greener” choice when it comes to travel and housing, the impact of the residential sector would be much lower.

Woodinville, Wash. – An interactive summit focusing on the future of the food system in the greater Seattle metropolitan area will be held on Friday, November 18, at the Brightwater Convention Center.

Hosted by Washington State University (WSU) Metro Food Energy Water Seed Grant Research Team, the Urban Food-Energy-Water Summit provides an opportunity for the public to gain a deeper understanding of food, energy and water (FEW) interdependence in the greater Seattle area. A morning keynote address and panel discussion will be held from 8:30-11 a.m. and is open to the public. This will include presentations about research and discussions addressing the need for integrated natural resource management approaches. The panel discussion will be a forum for diverse stakeholders to share their perspectives on local food and agriculture.

A by-invitation afternoon breakout session and luncheon will be held after the public portion of the Summit from 11:00 a.m. to 4:30 p.m. Participants will discuss the various characteristics of resilient regional food systems. They will also assist in identifying future research directions that will support local decision makers when developing policies. Please contact Liz Allen if you would like an invitation to the afternoon session.

PULLMAN, Wash. – Julie Padowski, clinical assistant professor at Washington State University, has found that the loss of land cover around cities has increased pollution and raised the cost of water treatment.

Writing in the Proceedings of the National Academy of Sciences, she and coauthors say 90 percent of large cities around the world have lost natural land cover to agriculture and development since 1900.

The degradation of watersheds has affected water-treatment costs for nearly one-third of the more than 300 cities in the study. The affected cities saw operation and maintenance costs rise by more than half.

Padowski does research in the Water Research Center and Center for Environmental Research, Education and Outreach at WSU.

Leading the study was Robert McDonald, a scientist for the Nature Conservancy. His colleagues are Padowski and Katherine Weber of Yale University.

An abstract of the paper is available here. The Washington Post writes about the research here.